I spent my weekend following around Will Crum +1 like a good old fashion groupie. They played at the Light Gallery on 17th street in Costa Mesa for a group of close knit friends and a few innocent bystanders. Any nerves they or I had over the lack of turn out were demolished once their set began. They completely lit the room up. The thirty some people that were there could have been surrounded by three hundred more and we wouldn’t have noticed. They turned the gallery into a raging party, with everyone dancing, drinking, passing joints, and having a better time than anyone expected to have. It was incredible to say the least. Will is more confident than ever while playing in front of Kevin who smashes out their entire set on the drums.

From zero to sixty in seconds flat

Sunday was a brand new day, and a hot one at that. Me some ladies went over to the CAMP in Costa Mesa for a Toms Shoes event. We spent a lovely afternoon getting temporary tattoos and enjoying shaved ice in multicolored adirondack chairs. I got a little work done by throwing the girls into Hozell shirts and snapping some promo photos, but the real attraction was the days line up of bands. Will Crum +1 played in the heat of the afternoon sun, and we danced like flower children to his folk rocking melodies and clever cover songs. The Growlers played after Will which I thought was a wonderful paring for such a summery event. I felt I had a hard time capturing their lead singer Brooks and all his charisma on camera. They have an air about them that suggests they would play and look this good even if no one was watching: these five guys are the real deal. Their music is passive, beautiful, yet catchy with what I assume to be slightly troubled lyrics. I couldnt understand what was being said half the time, but I was so mesmerized it didn’t matter. Brooks reminds me of all the footage and old photographs of Jim Morrison that I’ve spent a good part of my life obsessing over. You’ll be able to find me brooding the corner at the next Growlers show, for sure. 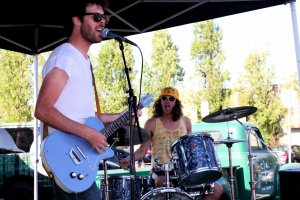 Kevin bringing it up a notch 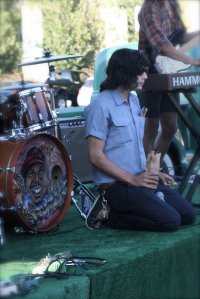 Though I wasn’t present for this I think it’s worth noting: Will Crum’s set that was heard this weekend by any and all who came out was recorded Monday evening in an analog studio in China Town. Coming soon 🙂